I recently stumbled onto the magnificent posters created by Martin Krzywinski over at http://mkweb.bcgsc.ca/pi/. He’s come up with some truly original ways to illustrate the appearance and complexity of various irrational numbers.

Specifically, I really liked the minimalism and simplicity of the 2013 edition, shown here: 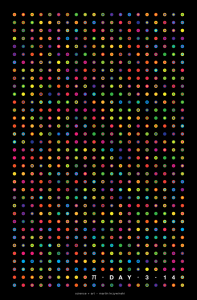 The rules used for generating the coloured dots is fascinatingly simple. Each digit 0-9 is assigned a unique colour. The i’th circle is then coloured according to the value of the i’th digit of Pi. The smaller circle inside is coloured based on the value of the following digit.

Martin created other versions as well, e.g. one where adjacent equals are connected by same coloured lines. They’re all fascinating and you can even buy them as posters!

Looking at these posters I couldn’t help wonder, what lay beyond the chosen boundaries for each poster. What if some great pattern or sequence was lurking just outside of view? If only there was a way to go explore further digits and other constellations using the same visualisation format.

Always the tinkerer, this got me thinking about how to create something like that. One thing led to another and before long I had a rough prototype cobbled together with D3.js.

I spent a bit more time adding a few input controls and polishing it into a neat little demo. I’ve put it up at:

Go try it out! Instructions are at the bottom.

As an example, this is how the Feynman Point looks, at a column width of 31: 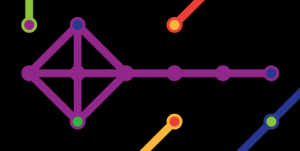 For the more curious out there, I’ve put the code on GitHub at github.com/rhardih/winski.

Working with JSON data it is sometimes necessary to visualise it in a human readable way. Since we care about the number of bytes we send to the browser, JSON is usually stripped of any kind of unnecessary whitespace.

Good for size, bad for readability.

Doing a quick search reveals that there are already plenty of options for online formatters. Here’s just a few examples:

For their intended purpose, they all work – Trying them out though, I started to think of how it could be done in a simpler way and that it might be a fun little project, to try out on my own.

For the lack of a better name, as the post title suggests, I decided to call it simply-json, feel free to suggest a more fitting name.

I wanted a minimal feature set, mostly what all the other formatters also provide:

I also included some design criteria, to formalise my idea of what “simpler” is:

Due the to the same origin policy enforced by most browsers, it’s not immediately possible to request JSON from a different domain than the current one. To do it, some form of proxy is needed.

An easy, fire-and-forget solution would be to use Yahoo! Query Language. The problem with YQL though, is that it transforms the JSON into XML and, if requested as JSON, transforms it back again to JSON. This transformation is lossy, which means e.g. numbers are sent back as strings. {"number":42} => {"number":"42"}. According to the docs:

To prevent this “lossy” transformation, you append the query string parameter jsonCompat=new to the YQL Web Service URL that you are using.

At the time of writing, testing this does in fact reveal, that the loss in number transformation is fixed. What hasn’t been fixed yet though is null values, which is returned as "null" strings instead.

So much for YQL.

Keeping things in the spirit of simplicity, a service that can proxy a GET request, shouldn’t be more than a few lines of code.

To that end, I chose to use Sinatra, which I’ve had good experiences with in the past. It really is an awesome lightweight web framework. Using Sinatra, this is all it takes:

I specifically chose 'net/https' so https sources were also supported, it only adds one extra line and can handle plain http just as well.

The immediate problem though, is that the current web server, Apache, is already running on port 80 and the same origin policy even blocks requests to different ports on the same domain.

Fortunately, this can be solved with some config magic server-side.

Firing up the Sinatra service on localhost:6789, we need Apache to redirect traffic to the /proxy path, back to the service instead of trying to serve content from that directory. This is what is needed in the config, in my case in the virtual host for éncoder.dk:

In case Apache hasn’t loaded mod_proxy, enabling it can be done with this command:

Working demo can be found here:

Go check it out.